Unanimous opposition from the medical fraternity on the proposed appointment of an administrative officer in all 13 state-run medical colleges on Tuesday prompted the BJP-led Madhya Pradesh government to step back, and put the controversial proposal in cold storage.
By Jitendra Jangid Wed, 23 Nov 2022 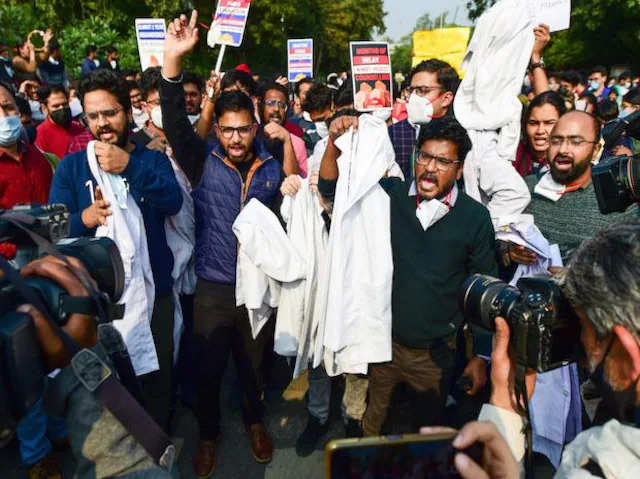 Bhopal, Nov 22  Unanimous opposition from the medical fraternity on the proposed appointment of an administrative officer in all 13 state-run medical colleges on Tuesday prompted the BJP-led Madhya Pradesh government to step back, and put the controversial proposal in cold storage.

Sources privy to the matter told IANS that the proposal of appointing Deputy Collectors/SDMs in each state-run medical college was to be put before the state cabinet for approval on Tuesday, but the meeting was suddenly cancelled, due to some ministers being busy in Gujarat elections.

However, later, a message was conveyed to Gandhi Medical College teachers association here that the proposal has been stayed, and it would not be brought before the cabinet in future.

This was the third occasion within the span of a year that the government had to step back on its proposal, as every time, the medical fraternity rose up in arms against the measure, arguing the medical institutions needed expertise from the same field. The state government has proposed that an administrative officer would be appointed to look after administrative subjects of each medical college.

According to doctors in Gandhi Medical College in Bhopal, the biggest medical institution of the state, this system has never been implemented anywhere in the country.

"We, along with the entire medical fraternity, would thank Chief Minister Shivraj Singh Chouhan and state Medical Education Minister Vishwas Sarang for taking the proposal back. Today, we were informed that the proposal has not only been postponed, but it will not be brought again before the cabinet," Gandhi Medical College Teachers Association President Dr. Rakesh Malvia said.

The proposal to appoint an administrative officer in the state's medical college was planned after the Covid-19 pandemic with a view to ensure more transparency and also reduce the burden from doctors, as they would be freed from all the administrative issues so as to focus entirely on their patients.

However, the doctors came out in opposition.

"How can a non-medical person tell which equipment or which medicine needs to be procured for the patients? Only a doctor can make these decisions. We are unable to understand why our own government is trying to kill our medical system," said Dr. Malvia.

The measure was initiated even without the proposal getting the nod from the cabinet when in August this year, a Deputy Collector was appointed as Chief Medical Commissioner of the Sagar Medical College. However, the decision was taken back within 24 hours after the teachers and students protested against it.

FROM AROUND THE WEB